Thurston lava tube, or Nahuku (nah-hoo-koo) by its Hawaiian name, sits hidden deep under a lush rainforest canopy inside Hawaii Volcanoes National Park, a dramatic remnant of what was once an enormous river of lava. This stunning example of a large feeder tube from an ancient lava flow is well worth a visit. There is easy access along a paved pathway from the parking area, just a half mile from the Kilauea Iki overlook.

Thurston Lava Tube lies at an elevation of 3,900 feet on the flanks of Kilauea Volcano. Shortly after leaving the parking area, the path descends into a pit crater, created when the surrounding magma chamber suddenly collapsed during the eruption. As you drop into the pit crater there is a mystical, almost prehistoric feel as the path winds through a forest of giant Hapu'u ferns, Ohia Lehua trees and other lush tropical vegetation. The air is moist and cool. 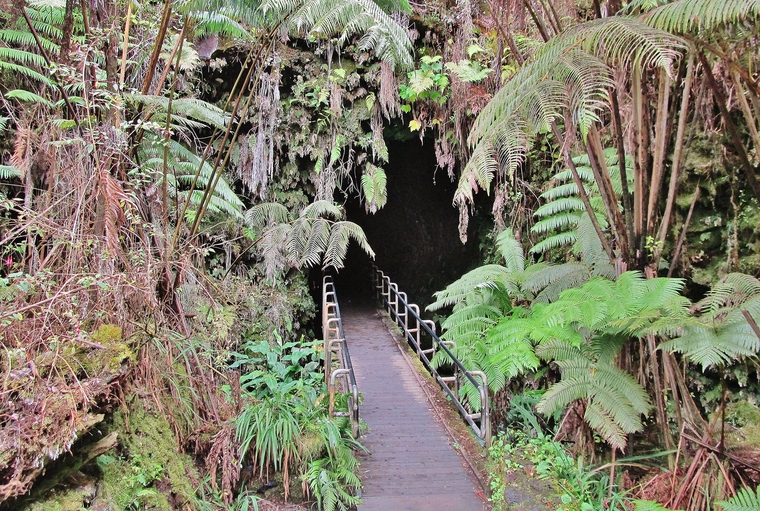 Lava tubes are one of the more fascinating spectacles created when a volcano erupts and the lava solidifies. Many of these caves or tunnels can be found on the Big Island. Thurston is massive, 600 feet long with a ceiling height of more than 20 feet in places. When it was discovered in 1913, the ceiling was covered with lava stalactites; no more. Sadly, collectors all but destroyed the original appearance of the cave.

When you reach the entrance to Nahuku try to imagine how it must have appeared several hundred years ago, a mammoth flow of molten lava as tall as a house oozing from one of Kilauea's many eruptions. As you walk through its depths, consider that lava still flows through similar tubes not far away at the Pu'u 'Ō'ō vent. 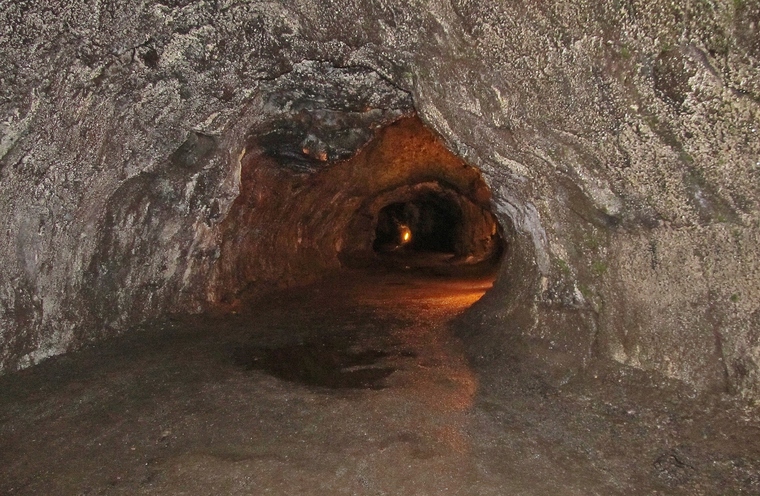 How A Lava Tube Is Formed

During an eruption, a lava tube acts as a pipe for molten lava, forming when the thicker and slower moving outer surface of the lava stream cools and begins to form a hard outer shell. The result is a tunnel that insulates the liquid lava, allowing it to continue flowing, sometimes for many miles. After the faster moving lava inside the tunnel has passed through and stopped flowing, the cave that is left behind is a lava tube.

Much like the overall energy of Hawaii, volcanoes of Hawaii tend to erupt rather casually, in no big hurry to get anywhere. As you travel around the island you will notice two distinct types of lava. Pahoehoe (pä-hoí-hoi) has a smooth, ropy texture, while a'a (äh-äh) is rough, chunky and often sharp.

At the time of eruption, pahoehoe is hotter and more fluid. The many lava tubes on the island are a result of the outer shell of a pahoehoe flow cooling more quickly while the interior liquid continues to flow.

Thurston Lava Tube is a little more than 1.5 miles (3k) past the entrance to Hawaii Volcanoes National Park, south on Crater Rim Drive. The area gets crowded and parking can be a challenge, so it is sometimes easier to park up the road at the Kilauea Iki overlook. From there it's a pleasant half-mile walk to the lava tube.

Give yourself at least 30 minutes to truly enjoy the lava tube and surroundings.