Just how Hawaii Island volcanoes are formed, and the creation of the extensive island chain, is a fascinating story. Hawaii is geologically unique, formed by a "hotspot" in the middle of the Pacific Plate.

Tectonic plates are relatively thin, even thinner under oceans. Far beneath the floor of the Pacific Ocean, pools of fiery magma have broken through a thin spot in the Pacific Plate. Known as the Hawaiian hotspot, this magma intrusion creates undersea volcanoes. As large amounts of cooled lava rock pile up while more magma oozes up from below, some of the volcanoes eventually rise high enough to break the ocean surface, forming an island. 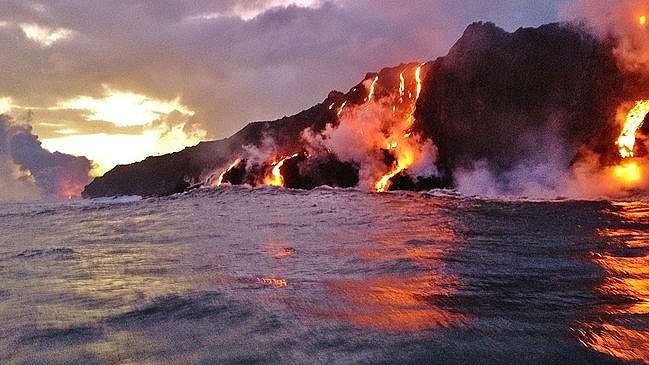 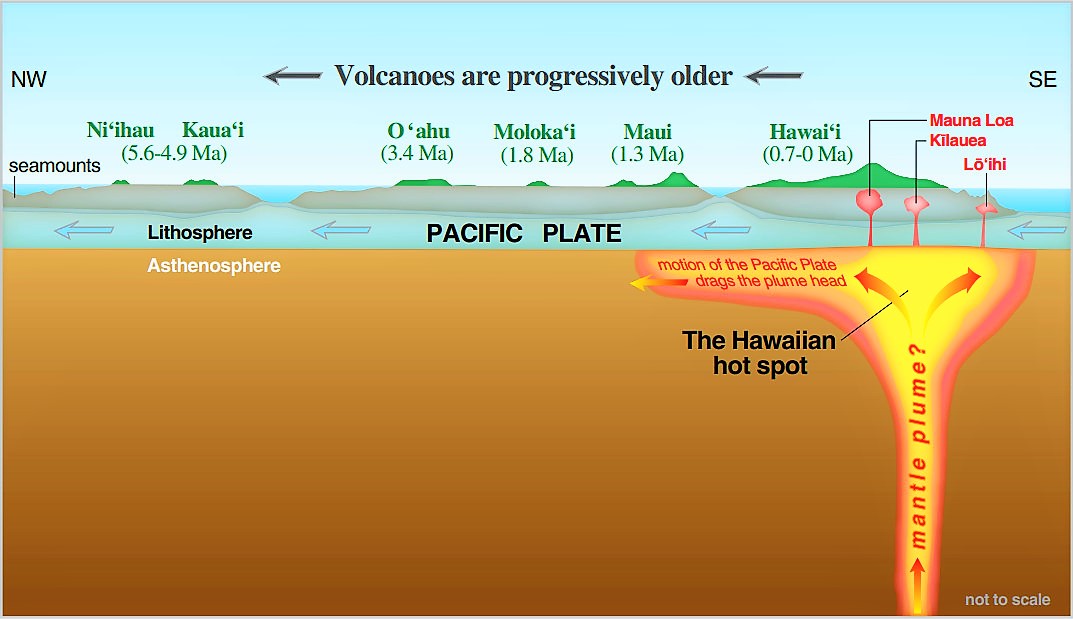 Kaua'i is the oldest of the main Hawaiian Islands at about 5 million years. By contrast, surface lava flows on the Big Island are less than 1 million years old. Kaua'i is also the northern-most island, since the Pacific Plate is moving that direction. The Big Island of Hawaii is farthest to the south, youngest, and currently sitting directly above the Hawaiian hotspot.

The Hawaiian hotspot is roughly 50 miles (80 km) in diameter. Today, one edge of it is below the Big Island, fueling the active eruption of the Kilauea volcano, while another edge is beneath the erupting Kamaʻehuakanaloa volcano (formerly the Lo'ihi Seamount), south of the Big Island and 3,000 feet (914 meters) beneath the ocean's surface. Some scientists estimate that Kamaʻehuakanaloa will rise above the ocean's surface in as little as 10,000 years, while others suggest it will more likely be more than 50,000 years, if at all. 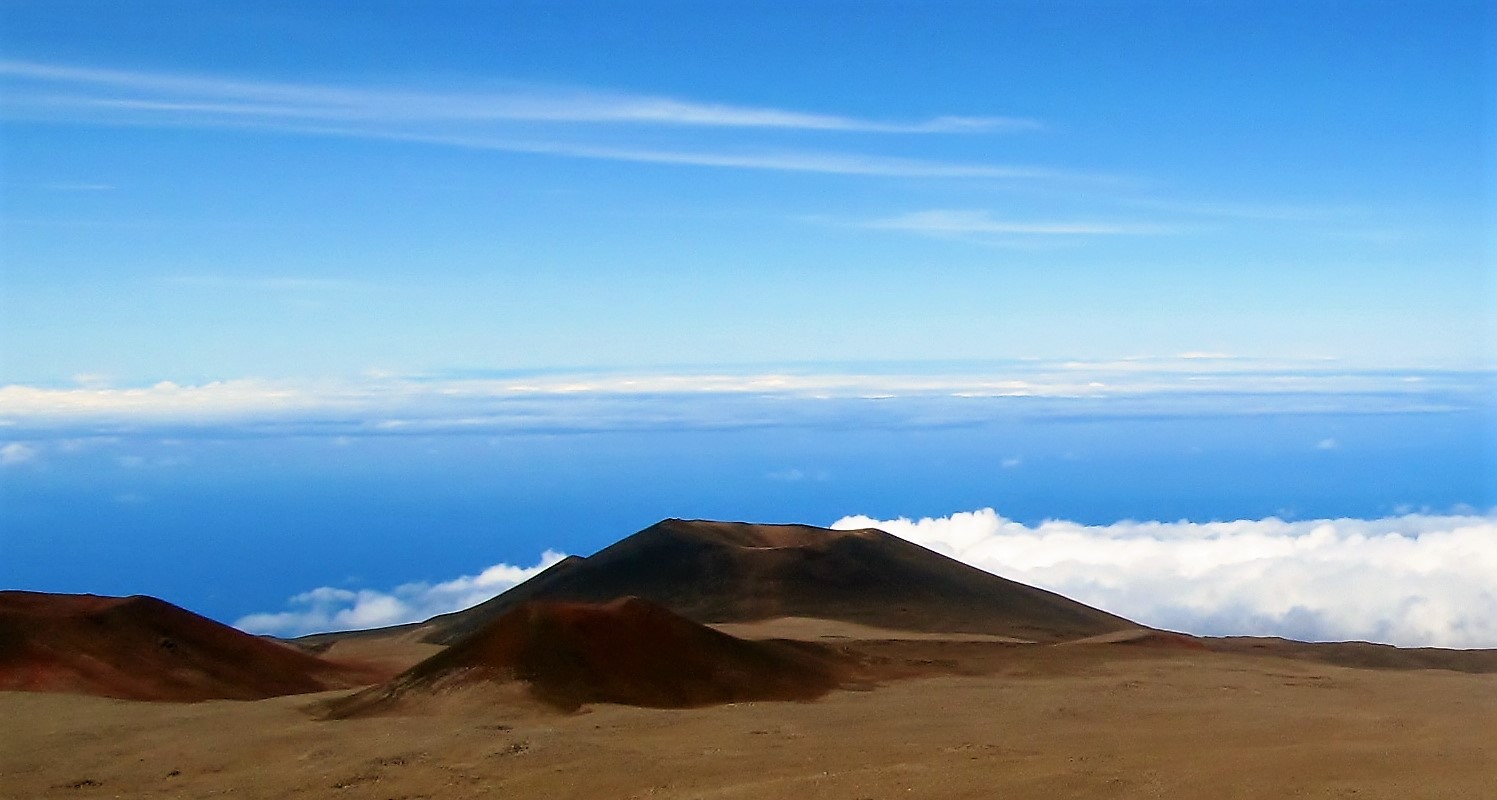 The Big Island consists of five coalesced volcanoes, volcanoes whose lava flows have merged to form the island. Three of these (Kilauea, Mauna Loa, and Hualalai) are still close enough to the Hawaii hotspot to be active. A sixth volcano, Mahukona, is the oldest of the Hawaii Island volcanoes, now long extinct and submerged beneath the ocean north of the island.

There are two distinct types of lava that are known universally by their Hawaiian names, a'a (pronounced äh-äh) and pahoehoe (pä-hoí-hoi). While quite different in appearance, their chemical composition is essentially the same.

A'a lava tends to flow through channels on the surface, whereas pahoehoe often travels through underground tubes. A'a has more crystals and fewer gas bubbles than pahoehoe, the gas bubbles being squeezed out as the lava thickens while cooling. Once cooled, a'a is rough, clumpy and often sharp, making it difficult to walk on. Should you fall on it, you will quickly understand why it is called a'a! 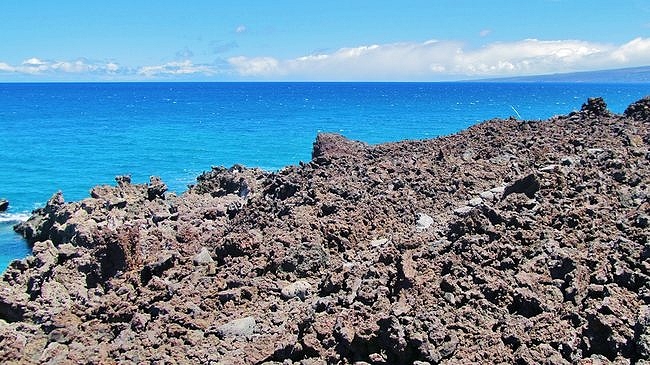 Pahoehoe lava has a smooth, ropy appearance, similar to thick chocolate cake batter. A higher concentration of gas bubbles contributes to the puffy appearance characteristic of pahoehoe lava. Lava tubes are formed when the outer crust of a pahoehoe flow hardens while the river of lava continues to flow inside the tube. 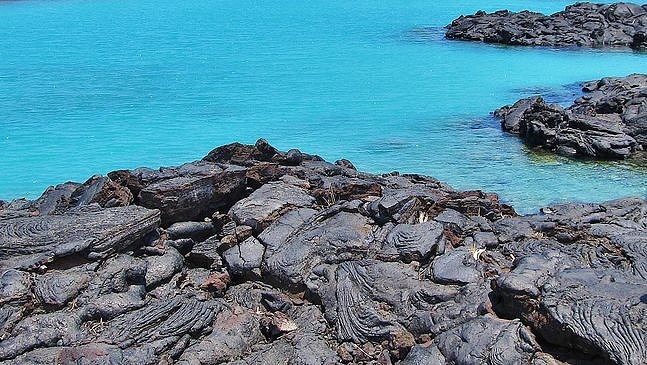 Often the same eruption can produce both pahoehoe and a’a lava. It is also possible for lava that starts out as pahoehoe to change to a’a, as it loses gas and cools while moving farther from the erupting vent. In general, a Hawaiian eruption with a great deal of lava more commonly produces a’a, whereas lesser flows are generally pahoehoe. 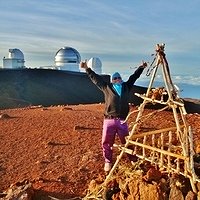