Flights to Hawaii once conjured up images of first-class service during the flight, with an authentic Hawaiian flower lei greeting upon arrival. Today there are more people flying to the Big Island than ever before, and most flights are packed full. You can still get a beautiful plumeria or orchid lei when you arrive, but you'll have to pay for it.

But we're getting ahead of ourselves. The real fun begins when you start planning your flight to the Big Island. Getting here can be a breeze if you plan well in advance of your trip. We'll help you find the best Big Island flights.

First things first: did you realize there is more than one Big Island airport? You have a choice between booking your Big Island flight into the Kona airport (KOA) on the west side of the island or Hilo International Airport (ITO) on the east side.

The majority of travelers to the Big Island book their flights to Kona since the best beaches and most of the top resorts are found on the west side, although there is typically very little difference in Big Island airfare between the two airports. If most of your exploring will be in the rainforest or near the active volcano, by all means fly into Hilo. Depending on where you plan to explore, you might also consider flying into either Kona or Hilo, and flying out from the other side of the island. 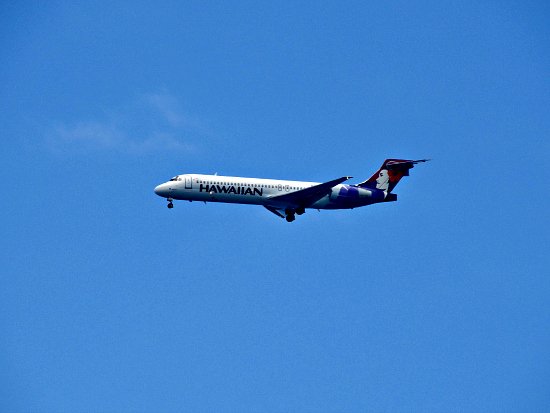 Several other carriers offer international service to Kona with connections through Honolulu.

When flying from the mainland or international destinations, it is sometimes cheaper to book your flight to Honolulu, Oahu (HNL) or Kahului, Maui (OGG), then purchase a connecting flight to the Big Island on Hawaiian Airlines. Hawaiian Airlines offers many daily flights from Honolulu (the island of Oahu) and from Maui, into either Kailua-Kona (KOA) or Hilo (ITO) on the Big Island.

Direct Flights to the Big Island into Kona (KOA)

WestJet has seasonal (Dec-Apr) non-stop service from Vancouver, BC (YVR).

Direct Flights to the Big Island into Hilo (ITO)

United is the only carrier that currently offers direct flights into Hilo from the US mainland, out of Los Angeles (LAX).

Cheapest Flights to the Big Island

When is the best time to fly to Hawaii? When is Big Island airfare the cheapest?

Flights to Hawaii are notoriously expensive due to Hawaii's popularity as a vacation destination. With no less than 8 major airlines flying to the Big Island, they are all competing for your business. There are fewer seats available today as airlines have been forced to reduce flights, so you won't see as much fluctuation in Big Island airfare from one month to the next as you might have in the past.

Flights to Hawaii tend to be most expensive during the winter and spring holidays. Airfares go through the roof in December and early January when many students and family originally from the Big Island fly home. The same holds true in late March and early April when many families are traveling for spring break. Summer fares also tend to be higher, with heavy travel for summer vacation.

For cheapest flights to the Big Island, consider planning your trip during one of the months when airfares tend to be lower: mid-January through February, May, September and October. You may want to avoid Kona in early October unless you are participating in the Ironman World Championship. Because of the Ironman triathlon, hotels fill up, rental cars are hard to find, and flights may be more expensive.

Plan ahead! If you can be flexible with your schedule, and research different carriers, you can save a bundle on Big Island airfare. Flexibility is key. Try to arrive and depart mid-week. Mondays and Fridays are typically busiest, with correspondingly higher fares. We've watched as the fare for a particular flight skyrockets, increasing several hundred dollars literally within minutes, only to drop back down the following day. If you see a great fare, grab it, but be patient enough to wait if it seems too high.

Flights from the west coast are obviously less expensive than from other cities. Depending on your preferred air carrier, it is sometimes cheaper to book your trip in two segments. Research the cost of flying into Seattle, Portland, San Francisco, Los Angeles, or other west coast airports first, then booking a separate flight from the west coast to the Big Island.

What better way to be greeted on the Big Island than with an authentic Hawaiian flower lei greeting! When flying into Kona, be sure to make arrangements in advance of your trip for your loved ones to enjoy this traditional welcome to Hawaii.

Getting here can be half the fun! In addition to flights to Hawaii, several cruise ship companies offer a Hawaii Island cruise that includes stops in Hilo and Kona. There are weekly departures from Honolulu, and periodically throughout the year cruises sail from mainland US ports, Vancouver, BC and Ensenada, Mexico. For an altogether different perspective of the islands, consider a Hawaii Island cruise!