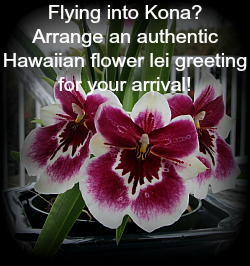 Before booking your flight to Hawaii, decide which airport is best for your travel needs. This will largely depend on where you plan to spend most of your time. The majority of visitors to the Big Island fly into and depart from the Kona airport, for obvious reasons. First, a greater number of airlines provide service into Kona. Secondly, the west side of the island has most of the best beaches, and consequently this is where you find most of the top resorts.

Unless you are with a tour group, we strongly recommend renting a car in order to maximize your sightseeing opportunities. Most major car rental companies serve both airports. Shuttle services are available to area hotels from the Kona airport only. 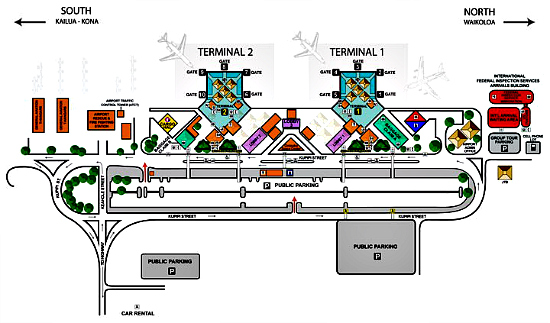 Kona International Airport (KOA) was dedicated on July 1, 1970, replacing the former airport in Kona that is now part of the Old Kona Airport State Recreation Area.

The Kona airport serves mainland US, international, and interisland flights. Click on the above image for a larger Kona airport map, including terminal locations, parking and Big Island rental cars.

Kona airport parking is available across the street from the terminal building, with shuttles providing service to the nearby rental car lot.

Upon landing at Kona International, passengers deplane by means of a mobile stairway. Kona is the only major airport in the Hawaiian Islands where such a ramp is still used to board and deplane passengers. The entire airport is open air with a tropical style terminal. 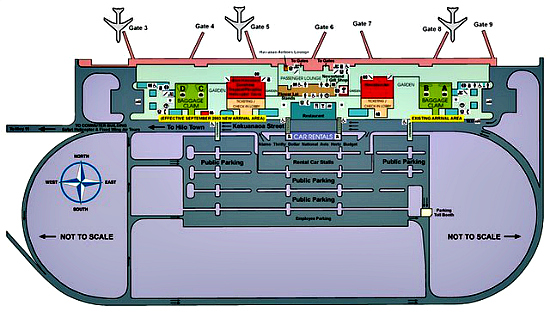 Contrast this with Hilo International Airport (ITO) which has a fully enclosed terminal with jetways. Makes sense, right? Open air: sunny side. Enclosed terminal: rainforest side.

The Hilo airport has had numerous facelifts but is in roughly its original location from when the first landing strip was constructed in 1927. Click on the above image for a larger map of Hilo International Airport.

Airport parking and car rental counters are right across the street from the terminal building at the Hilo airport.

Return from Big Island Airport to Flights To Hawaii